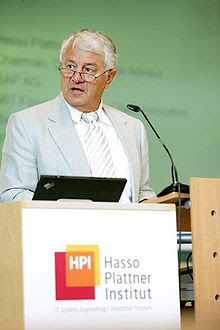 Hasso Plattner is a cofounder of software giant SAP AG. Today he is Chairman of the Supervisory Board of SAP AG.

Hasso Plattner (born 21 January 1944 in Berlin, Germany) is a German entrepreneur. He is married, has two children and lives in Schriesheim-Altenbach near Heidelberg, Germany.

Together with Dietmar Hopp, Claus Wellenreuther, Hans Werner Hector and Klaus Tschira, he is one the founders of the software giant SAP AG. He was also chairman of the board until 2003 and is currently the chairman of the supervisory board.

Since his retirement from SAP, Plattner has been particularly active as a benefactor in the field of technological research. Media reports have named him one of Germany's most important private sponsors of scientific research. Plattner received his honorary doctorate in 2002 and his honorary professorship in 2004 from the University of Potsdam. Plattner had also received an honorary doctorate (1990) and an honorary professorship in Information Systems (1994) from the Saarland University, Saarbrücken. The same university named him an honorary senator in 1998.

Also in 1998, Plattner founded the Hasso Plattner Institute for software systems engineering based at the University of Potsdam, and inPalo Alto, California, its only source of funding being the non-profit Hasso Plattner Foundation for Software Systems Engineering. Plattner has pledged 50 million euros of his personal fortune over a period of 20 years. Since its foundation, Plattner's commitment to the HPI has quadrupled to over 200 million euros. He not only fully finances the HPI, but is also actively involved as a director and lecturer in Enterprise Platforms and Integration Concepts.

In October 2005, with a donation of 35 million USD, Plattner founded the Hasso Plattner Institute of Design at Stanford University. Students of varying disciplines have been charged with the development of user-friendly innovations. Another of Plattner's pledges to promote science was of 10 million euros to redevelop the library at the University of Mannheim, Germany, given in 2003.

The venture capital fund HassoPlattnerVentures, set up with a starting balance of more than 25 million euros, was founded on 1 July 2005 in the German city of Potsdam with the goal of supporting young entrepreneurs in transforming their ideas into marketable products. As of December 2009 HPV manages 150 Million Euros and has 17 companies in its portfolio. An affiliate fund, HPV Africa, was founded in 2008 with 29 Million Euros, and has already invested in five companies. SAP co-founder Prof. Dr. h.c. Hasso Plattner provides the lion’s share of this investment capital, along with InvestitionsBank of Brandenburg and CMEA Ventures.

On 28 October it was announced that Hasso Plattner took a shareholding of EUR 5 million in HC Berlin Pharma AG based on a property contract, whereby HC Berlin Pharma AG buys his 17,000 sqm building incl. the 21,000 sqm freehold in the Science Park Golm in Potsdam, next to Max Planck Institute and Fraunhofer Institute for shares and cash. The companies flagship product is ArTiMist(TM), an anti-malaria drug specially developed for children and administered as a sublingual spray.

For his commitment to economics and science, Plattner has received a number of honours. Germany's manager magazin awarded its coveted Leadership Award for Global Integration to the "technology guru" and inaugurated him into their Hall of Fame, which honours personalities for their promotion of economic and social development in Germany. In 2001, Time Magazine Europe ranked Mr. Plattner number one on its list of the most important and influential IT personalities.

On 21 January 2004, at a ceremony at the Hasso Plattner Institute celebrating the 60th birthday of its founder, German Chancellor Gerhard Schröder made the following comments on Plattner’s achievements: "We need more Hasso Plattners and more SAPs in order to get Germany moving again economically." According to the Chancellor, Plattner was able to create an international corporation that proved "that German companies can be at the top of the technological hierarchy worldwide". The Chancellor argued that Germany could learn a lot from the HPI.

In an interview in August 2004, the Munich-based management consultant Roland Berger named Hasso Plattner as one of the five Germans who have made the greatest impression on him. In the Welt am Sonntag article Berger pointed out how Plattner founded, built up and adapted SAP to a changing market was a "master achievement".

Plattner is said to be the 11th richest man in Germany with an estimated fortune of 5 billion USD, according to Forbes.

Plattner has occasionally been brought into the public eye due to disputes with Oracle's founder Larry Ellison. Both share an unusual passion: racing transoceanic yachts around the world. The two have frequently come head-to-head, and such meetings have not been without their animosity.

Alongside sailing the high seas, Plattner is a keen golfer. He owns the Fancourt Golf Estate, near George, in South Africa which has four Gary Player designed championship courses. The Links of Fancourt staged the 2003 Presidents Cup matches between the USA and an international team, captained by Gary Player. 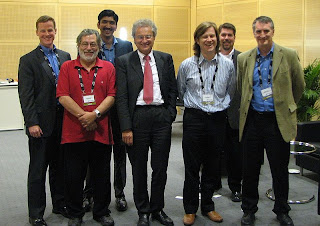 Kagermann joined SAP in 1982 and was initially responsible for product development in the areas of cost accounting and controlling. Later, he oversaw the development of all administrative solutions, including human resources, as well as industry-specific development for banking, insurance, public sector, and healthcare. His duties also included finance and administration as well as the management of all SAP regions. He has been a member of the SAP Executive Board since 1991.